Introduction
"La Fonera" is one of the names for a certain WiFi access point produced by Accton.
It's popular because it's cheap, small and very hackable.

It's got a great Atheros chipset and is well suited for use with "pentesting" software such as aircrack-ng, mdk3 or Karma/Jasager , and there have been attempts at making it portable by adding battery power.

But I've never heard of anyone adding a physical user interface to make the Fonera a truly portable and autonomous device, and I decided to change that...

To get some help and motivation to finish it, I've registered it as a team project for school.

So with 5 people and 6 months of work we came up with this: 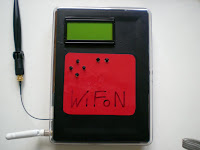 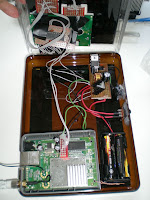 I did the hardware and uC firmware, while the rest of the team wrote software that ran on the AP. 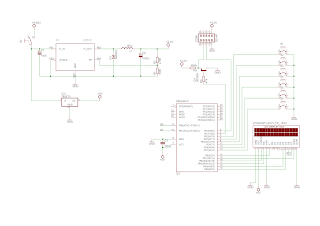 The total cost (not counting the Fonera) was about $20.

The power supply had to be efficient and provide two voltages - 3.3V for the AP and 5V for the uC and LCD.
3.3V is provided by LM2576 - a switching regulator (for high efficiency), and 5V is provided by a cheap 7805 linear regulator, because the LCD and uC don't require much power.

As a result, the device accepts any voltage above 6V (tested up to 16V), and two 900mAh Li-ion cells allow for 90 minutes of operation.

No Arduino here, because I'm a cheap anti-arduino bastard ;P
I chose the ATMEGA88 chip, because it's cheap and I'm familiar with it.

The buttons and LCD are directly connected to the uC, which communicates with the AP via UART at 9600 bps. There is a transistor between the TX pin of the uC and the AP to bring down 5V signals to 3.3V, a conversion is not needed for the other UART pin.

The communication protocol between the uC and AP is very simple.
A button press sends a single ASCII symbol followed by a carriage return symbol, for example the UP button sends the letter 'w' (0x77) followed by CR (0x0D) .

Software on the Fonera

Most of the software was written in Ruby, because that was the only reasonable scripting language that fits on the flash memory of the Fonera, and to our surprise it wasn't very resource-intensive, even on such limited hardware.

My friend - Kacper, wrote the software to allow other applications to use the screen and buttons.
He also wrote a great menu system used by the rest of the team for their apps.

The interface software runs on the serial port instead of a regular terminal.
It poses as a regular terminal, but with a size of 16x4, so that any existing app can run in it, but you have to modify it to be able to read anything :P

Grab the code and more documentation of the interface here:
http://code.mwgamera.name/gitphp/index.php?p=wifon.git


The rest of the team - Adam, Marek and Michał, adapted software to work nicely with the LCD and buttons.

In the end we got these things working:
- displaying networks found by airodump-ng
- deauthentication of a selected client
- connecting to an unsecured network and scanning i with nmap
- several attacks using mdk3
- displaying CPU and memory usage


As with most school projects, some things were rushed to meet the deadline, but we're satisfied with the result.

All in all, it's not really a useful device, more of a proof of concept, but it was fun to build and it's working.

Also, we did it because we could, and that is all that matters!

I will post the full sources as soon as all the team members agree.
Posted by Emeryth at 4:40 PM